Liverpool legend Jamie Carragher has remembered happenings on September 22, 2009 when the Reds played Leeds in the Carling Cup. 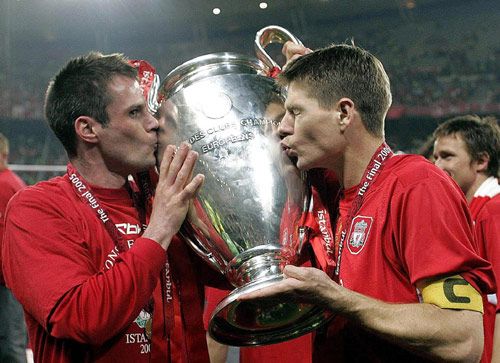 The retired defender turned pundit shared a photo from that night, clearly showing the clubs rising star Trent Alexander-Arnold as his mascot.

Carragher shared the phone on Twitter following the exceptional 25-yard free kick the player in question scored in the Champions League playoff game against Bundesliga side Hoffenheim.

The 18-year old scored his first ever senior goal as Liverpool cruised to victory. It was a goal even established stars like Philippe Coutinho would dream to net.

As a skipper back in 2009, Carragher led the team out at Elland Road in the cup fixture, holding the then 10-year old Alexander-Arnold. It was a tight clash as Liverpool struggled to defeat their opponent. It was later flop David Ngog that scored a brilliant effort to help the club progress.

After eight years, Alexander-Arnold was no longer a mascot but the hero. With the move of Coutinho to Barcelona making the rounds, Coach Jurgen Klopp left the Brazilian aside and the rest of the team doing the required.

Nathaniel Clyne remains sidelined to Klopp played Alexander-Arnold in the full-back role. He shocked many when he stood up to take the free kick. It was obvious he had been practicing. He took the kick and left many agape with his display. Clyne surely has a new competitor for a role if the youngster can keep up his performance.